Subaru Telescope HSC Wide Field Corrector [ REPLICA ] has passed a close examination and completed at Canon Inc., where we have ordered to produce it, on Febuary 7, 2011.

【HSC 】
HSC (Hyper Suprime CAM / ref. photo on top-page ) is a suprime camera exceeding 900 million pixels and 3 tons in size. It has a plan to be mounted on the Prime Focus, Subaru Telescope in Hawaii as one of our projects. By mounting on Subaru Telescope, we can draw a precise picture of galaxy shape. This will thus lead to reveal the mystery of dark energy. The time for on-board is expected to be autumn in 2011. 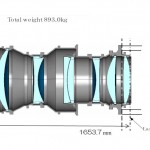 One part of this HSC, Wide Field Corrector, has been assembled by seven lenses that are each 1m in diameter, and it is now carefully scrutinized at Utsunomiya factory in Canon Inc.. Prior to this examination, a REPLICA was also manufactured with the same weight and width as the real one. On Febuary 7, 2011, this replica was passed the similar examination and completed. 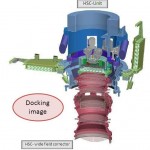 This replica, almost similar to the genuine HSC Wide Field Corrector in its weight and width, has been transported to MITSUBISHI electric co. in Amagasaki city. And it is going to have several tests for docking with HSC-Unit.

【”Genuine” HSC-Wide Field Corrector 】
The genuine HSC-Wide Field Corrector assembled “genuine” lenses, each 1m in diameter as mentioned above, is still on a stage of examination at Canon Inc. in Utsunomiya city. As soon as completed it should be transported to MITSUBISHI elec. co. in Amagasaki city and it should have the same stages as the replica. It has to have more careful docking tests, of course though.

After all, we would say that we are now little bit closer to the project`s theme, “Reveal the origin and fate of the Universe”.

HSC Wide Field Corrector 【REPLICA】 the same weight and width as the genuine one / docking tests are on going prior to the real stage. 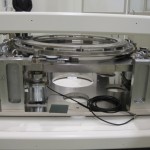 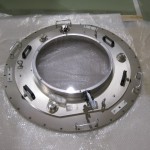