An international team of astronomers from Taiwan, England, and Japan has used the Subaru Telescope to measure the distribution of dark matter in fifty galaxy clusters and found that its density gradually decreases from the center of these cosmic giants to their diffuse outskirts. This new evidence about the mysterious dark matter that pervades our Universe conforms to the predictions of cold dark matter theory, known as “CDM”. 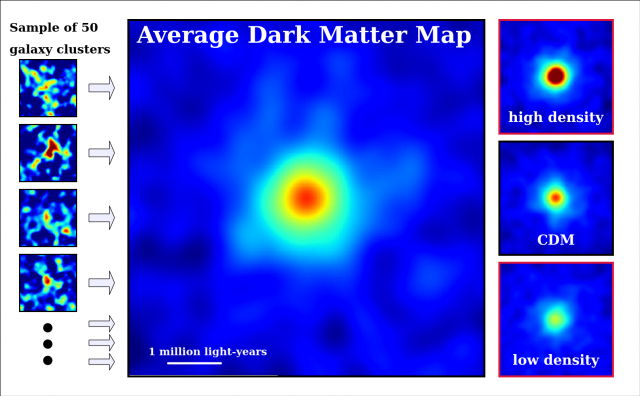 Dark matter maps for a sample of fifty individual galaxy clusters (left), an average galaxy cluster (center), and those based on dark matter theory (right). The density of dark matter increases in the order of blue, green, yellow, and red colors. The white horizontal line represents a scale of one million light-years. The map based on predictions from CDM theory (right, middle) is a close match to the average galaxy cluster observed with the Subaru Telescope. (Credit: NAOJ/ASIAA/School of Physics and Astronomy, University of Birmingham/Kavli IPMU/Astronomical Institute, Tohoku University)